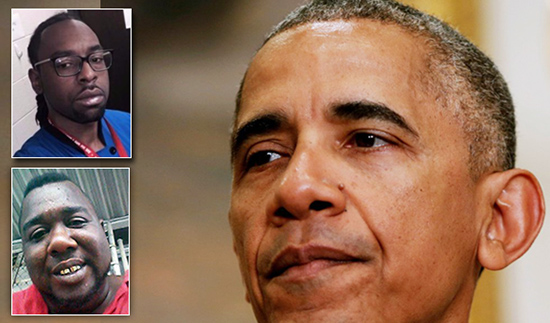 President Obama made a brief statement about the senseless shooting deaths of 2 black males by cops.

In a statement released on Thursday, Obama said he was “encouraged” that his justice department opened an investigation into the death of Alton Sterling.

The 37-year-old father-of-5 was selling CDs outside a Baton Rouge convenience store when he was killed by 2 cops early Wednesday.

Obama also mentioned 32-year-old Philando Castile, a Minnesota cafeteria worker who was shot to death on Wednesday by a milquetoast cop during a routine traffic stop.

“We’ve seen such tragedies far too many times, and our hearts go out to the families and communities who’ve suffered such a painful loss,” Obama said in his statement.

Obama took care to praise the thousands of men and women in law enforcement who risk their lives to protect the public.

“To admit we’ve got a serious problem in no way contradicts our respect and appreciation for the vast majority of police officers who put their lives on the line to protect us every single day,” Obama said. “It is to say that, as a nation, we can and must do better to institute the best practices that reduce the appearance or reality of racial bias in law enforcement.”

Steve Pratt of Atlantic City, NJ had just served a thirty (30) year prison sentence for killing his neighbor after an argument. He rung the neighbor’s doorbell on October 11, 1984 and shot him dead.

Fast forward, thirty (30) years later and Pratt is now 45 when he is released, and he returned to the Atlantic City neighborhood where his 64-year-old mother resided (pictured inset above). Neighbors said the woman took the bus to work religiously at 6:00 am every morning, never could they have imagined she’d loose her life at the hands of her son, two days after he was released from prison.

On the Sunday morning after Pratt’s release, police found Gwendolyn dead from blunt force trauma to the head. Pratt was charged, and at his initial court appearance, he wept.

“I have failed,” Pratt told the judge, his voice barely audible, the Press of Atlantic City reported. “I don’t want a trial. I’m guilty.”

Lawd have mercy Jesus, this story is sad and heart breaking!

Pratt officially pleaded guilty to manslaughter this week. He is expected to be sentenced to 25 years in prison, according to the Associated Press.

On Tuesday evening a Ferguson Missouri special grand jury, hand picked by the County Prosecutor, Robert McCulloch failed to indict policeman Darren Wilson for the killing of an unarmed black teen. The announcement of “no indictment” came after 8:00 PM and sparked outrage in the streets of Ferguson and throughout cities across the U.S.

Michael Brown was killed by Wilson on August 9 with his hands raised in the universal symbol of surrender and retreat. It was later revealed that Brown yelled “Don’t shoot!” before he was gunned down in a hail of 10 bullets.

Join me tonight at 6:30 PM on “Conversations Of A Sistah” via Blog Talk Radio.com as my guest, hip-hop lyricist K.Y.D. Works (Hassan Barrow), return to the show to talk about his organization’s crusade to help end an epidemic of gun violence that is killing our people and prevalent in our communities. And to discuss with me, how the lost lives of black males in this country have been on the rise.

Fruitland Park, Florida is 50 miles northwest of Orlando with a community of less than 5,000 residents and has been recently rocked with news that their policemen are a part of the Klan. An investigative report linked two city officers with the secret hate society that was once violently active in the area.

Fruitland Park, has been dealing with alleged KKK ties and other problems in the police ranks since 2010, when Elkins resigned after his estranged wife made his membership public.

As recently as the 1960s, many in law enforcement in the South were members of the KKK. Is it exceedingly unusual these days to find a police officer who are secretly Klansman? Sounds unrealistic and far-fetched but its shockingly a grim reality.

My cousin (who is in law enforcement in Florida) recently shared what has since been confirmed through a PoliticsNation investigative report, that Klansmen still exist on police forces throughout the south. They’re not only policemen wearing badges but they’re judges, lawyers and secretly hate behind the laws in the counties and states which they govern.

Membership in the Klan is secret. Like many fraternal organizations, the Klan has signs which members can use to recognize one another. A member may use the acronym AYAK (Are you a Klansman?) in conversation to surreptitiously identify himself to another potential member. The response AKIA (A Klansman I am) completes the greeting.

People fled, dropped their shopping and ran out of the Garden State Plaza in complete pandemonium as a gunman carrying an assault rifle, walked in and fired shots inside of the largest mall in Bergen County.

Clad in a black leather jacket and a biker helmet, the gunman stalked hallways firing at least seven shots before he is believed to have fled the mall leaving law enforcement officers scrambling, officials said.

Numerous witnesses described the scene as frightening and chaotic while people scrambled for safety as the gunman slowly made his way  through the mall, which is located at the intersection of Route 17 and  Route 4, near the Garden State Parkway in Paramus, NJ.

Police in Paramus called in SWAT units, and other local officers from surrounding cities and within minutes of the initial  reports the mall’s parking lot was swarming with police cars and SWAT buses.

So far no reports of anyone being injured and the gunman is still at large.