And that appears to be just what those close to Houston suspected would happen.

While the actual cause of death was temporarily listed as “deferred” on Houston’s death certificate pending the result of toxicology tests, “nothing suspicious” has been found to connect any physicians or other people of interest to Houston’s case and the inquiry is nearing completion, the source says. Plus, “she had no marks on her body whatsoever to indicate a struggle, and she was the furthest thing from trying to kill herself.

Sources have told E! News that Houston had prescriptions for antidepressants and anti-anxiety medications, and a handful of pill bottles were reportedly found in her room at the Beverly Hilton, where she was found dead in the bathtub.

According to the Washington Post, Alabama authorities have arrested a stepmother and a grandmother for forcing a 9-year-old girl to run for 3 hours on Friday, as punishment for eating candy bars.

The girl’s stepmother, 27-year-old Jessica Mae Hardin, called police at 6:45 p.m., telling them Savannah was having a seizure and was unresponsive. Paramedics and deputies arriving at the home knew something wasn’t right.

Deputies were told that Savannah was made to run as punishment for lying to her grandmother, Joyce Hardin Garrard, 46, about eating her candy bars.

Without adequate water or salt intake after three hours of grueling roadwork, Savannah Hardin collapsed and suffered seizures. Savannah died Monday at Children’s Hospital in Birmingham, of a cardiac arrest.

The sheriff’s press release said an autopsy report showed Savannah was extremely dehydrated and had a very low sodium (salt) level. A state pathologist ruled it a homicide.

Did someone in Whitney Houston’s camp sell this photo to the National Enquirer or did her family flat-out sell the photo to the Enquirer which is why the viewing was made private?

The national gossip rag displays a photo of the pop icon lying in an open coffin wearing a purple dress on the cover of this week’s issue. The photo is believed to have been taken inside the Whigham Funeral Home in Newark, NJ where her family attended a private wake last Friday.

No word on how much the magazine paid the insider for the photo. 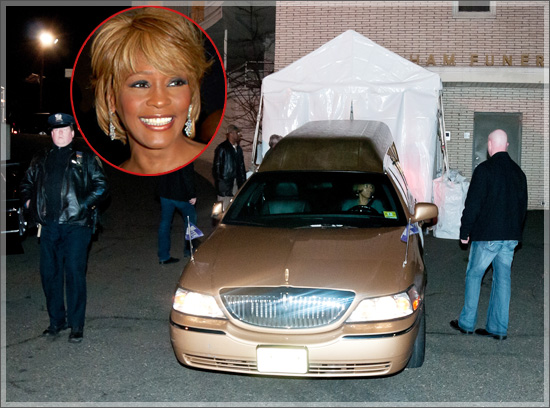 Preliminary blood test results revealed the presence of benzodiazepines in singer Whitney Houston’s system after she died, according to Radar Online. The benzodiazepines found in Whitney’s system — Xanax, Ativan, and Valium — are sedatives prescribed for high anxiety and stress disorders associated with depression. Some benzodiazepines are highly addictive.

Houston, 48, was found unresponsive in the bathtub of her luxury suite at the Beverly Hilton on Saturday. She was pronounced dead at the scene by paramedics at 6:55 p.m. EST.

The law enforcement source also corrected a fallacy that is commonly quoted to the media by coroners — that toxicology test results take 4-6 weeks to come back.

“Toxicology testing and results don’t take 4-6 weeks to come back. Look at how quickly toxicology screening tests are done in hospital emergency rooms when someone comes in with an overdose. The Coroner and the Beverly Hills Police Department have placed a security hold on the case, so it will be a few weeks before the results are revealed publicly.”

Below Cissy waits to enter the funeral home to view her daughter’s body.

Whitney Houston’s body was flown into Teterboro airport last night and driven by hearse with a police escort to Whigham Funeral home in Newark, New Jersey.

A large crowd was gathered at the funeral home outside. Cissy Houston, the singer’s mother, was waiting inside, police said.

The funeral for the pop superstar will be held on Saturday 12 Noon at her home church, New Hope Baptist, according to the owner of the funeral home handling the arrangements.

The private ceremony is open to invited guests only, Whigham said. Reporters will remain outside.