They called their malicious outings “Jafrica” when these Mississippi teenagers from predominantly white Rankin County piled into their cars and drove into predominantly African American Jackson, Mississippi to “kill a nigga“. These trips were named for a portmanteau of “Jackson” and “Africa,” a nod to their specific and evil mission: to terrorize strangers for no other reason than that they were black. An evil act and racist behavior passed down from the Jim Crow era of their ancestors.

Sometimes they carried weapons; other times they operated solely with their fists. The young people targeted those who were homeless or drunk, because they would be easier to prey on and less likely to report an assault.

James Craig Anderson (pictured above), was killed during a “Jafrica” outing that day, a hate crime that led to arrests and sentences for 10 young people involved, all of whom pleaded guilty.

On Monday, four of the most prominent co-conspirators — Deryl Dedmon, 23, John Rice, 23, Dylan Butler, 24 and William Montgomery, 26 — were ordered by a federal judge in Mississippi to pay $840,000 in restitution to Anderson’s estate. The restitution case was prosecuted by the Civil Rights Division of the Justice Department. 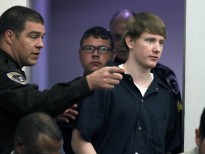 The four men (one of them pictured left), all of whom are white, were previously found guilty of committing a racially motivated act that resulted in Anderson’s death, and they are each serving between seven and fifty (50) years in prison.