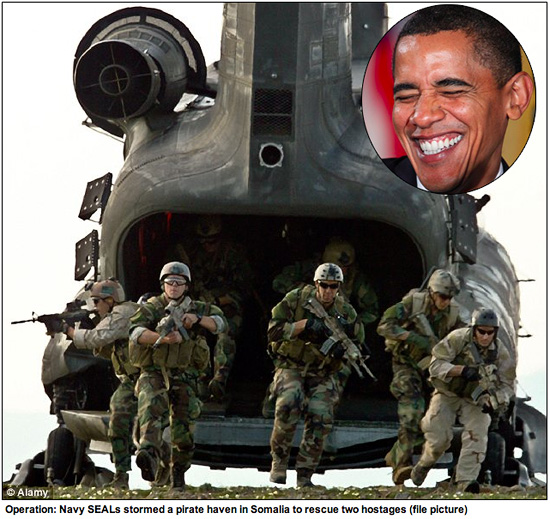 Last night, while the president delivered his confrontational State of the Union address, a special Navy SEAL forces unit, parachuted into Somalia to rescue an American man and woman.

During the fierce gun battle, nine Somali pirates were killed and five captured by the SEALs. The U.S. special forces team was the same SEALs unit that killed Osama bin Laden in Pakistan in May 2011.

The elite U.S. special forces team which killed Osama Bin Laden parachuted into Somalia last night and rescued an American woman and a Danish man in a fierce gun battle with the pirates holding them hostage.

Aid workers Jessica Buchanan, 32, of Rosslyn, Virginia, and Poul Hagen Thisted, 60, of Denmark, who were kidnapped last October, are unharmed and at a safe location. Source

Prior to the raid, Mr. Obama placed a call to Ms. Buchanon’s dad John to say: “All Americans have Jessica in our thoughts and prayers, and give thanks that she will soon be reunited with her family.”

Michelle is wearing that dress Fam. 🙂