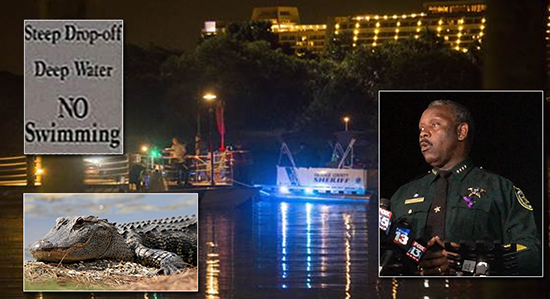 Divers and wildlife officials are searching for the remains of a 2-year-old boy who was dragged into a lagoon by an alligator near Disney World’s Grand Floridian Resort & Spa Tuesday evening.

The boy, on vacation with his parents and 2 siblings from Nebraska, was wading near the shore of the Seven Seas Lagoon when the attack happened at 9:15 p.m., Orange County Sheriff Jerry Demings told reporters at a press conference early Wednesday.

Demings described the father’s desperate attempts to wrestle his son from the alligator’s jaws. The child’s mother also dived into the water as the alligator retreated with the boy.

“The parents diligently tried to get the child,” Demings told reporters. He said the boy’s father suffered injuries on his hands during the attempted rescue.

The gator is estimated to be between 5 and 7 feet long.

Demings said 50 law enforcement officers, 2 marine units, a helicopter, and a gator tracker would continue the “recovery operation” throughout night.

4 alligators were caught overnight and euthanized to search for signs of the boy in the stomach contents.

Demings said there is no record of a similar gator attack at the man-made lagoon and beach, just steps from the resort hotel. 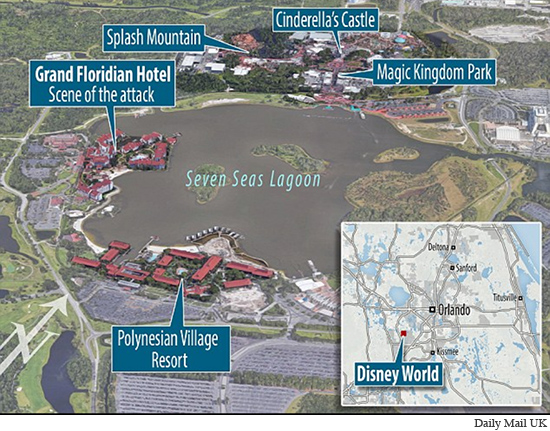 A Disney spokeswoman told reporters there were “no swimming signs” posted around the lagoon. The signs do not say alligators are lurking nearby. The spokeswoman said Disney world staffers were “devastated” and Disney was helping the family.

Resort guests were told to move away from their balconies, according to the UK’s Daily Mail.

There are over 1 million alligators in Florida. Wildlife officials record an average of 10 alligator attacks on humans a year.