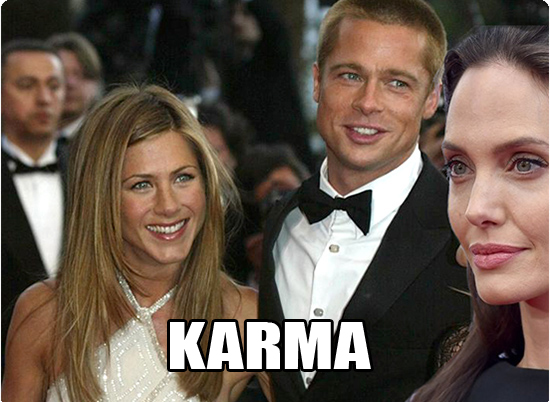 Angelina Jolie filed for divorce from Brad Pitt after she caught him cheating with his sexy co-star, a well-placed source told The NY Post’s Page Six on Tuesday.

Social media is having a field day with Jennifer Aniston memes. If you recall, Angelina Jolie was the woman who came between her and Jennifer’s then-husband Brad Pitt.

Jolie and Pitt tied the knot in 2014 after 10 years together. But it’s over now.

Karma is a brew best served hot and sweet.

Another woman is the real reason behind the sensational breakup of what many considered Hollywood’s most solid marriage.

Pitt, 52, was rumored to be creeping with his co-star Marion Cotillard, 40, while filming the war drama “Allied” in London.

“She hired a private eye because she felt that he was fooling around with her on the set, and it turns out, he was,” said the source.

Angelina suspected he was cheating with his co-star because she knew how he cheated with her when she was his costar. It’s always the same story, how you get him is how you lose him.

22 thoughts on “Angelina Jolie Files for divorce from Brad Pitt”