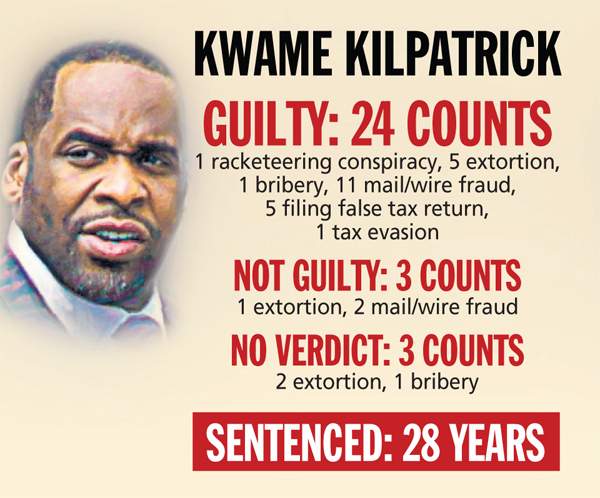 He had it all, first serving as a democratic delegate in the house of representatives, then elected the first young African-American mayor in the city of Detroit. He made his mother Carolyn-Cheeks Kilpatrick (former U.S. House Representative) proud, after-all it seemed he was following in her footsteps with a successful career in politics.

None-the-less, all of those hopeful dreams came crashing down after the former mayor was sentenced to twenty-eight (28) years in a federal prison for public corruption today.

Kilpatrick had a lot of dirt on his hands and all of these crimes are compounded by the involvement of other city officials as well. Thirty four other people have been convicted in connection with this public corruption case.

Kilpatrick took bribes, misused nonprofit funds and abused his power as mayor, to steer an astounding amount of business to a best friend. He had affairs, elaborate strip parties, spa weekends, took jet-setting trips to Las Vegas at his leisure and had his entire family on the payroll at Detroit’s city hall.

There were a lot of key players on Kilpatrick’s team and their sentencing day will follow next week, including his father Bernard Kilpatrick who faces up to three years in prison on a single tax charge.

70 thoughts on “Kwame Kilpatrick gets 28 years in prison”