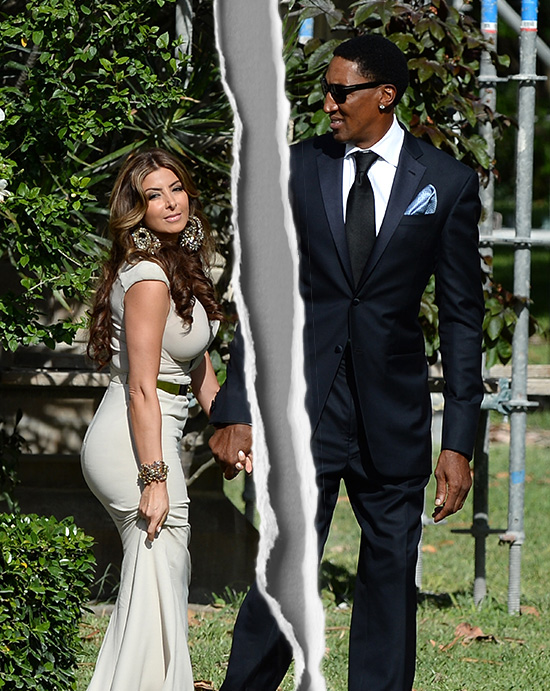 Scottie Pippen is divorcing his wife of 19 years, Larsa Pippen. Pippen filed the papers in a Fort Lauderdale, Florida courthouse earlier this week.

The 51-year-old Chicago Bulls legend has 7 children — 4 with his soon to be ex-wife Larsa and three from previous relationships.

Larsa, a 42-year-old Chicago native who met Pippen at the height of his career is ready to move on to greener pastures. As rumor has it, that she cheated on Pippen with rapper “Future” (pictured with him below). Larsa being best friends with Kim Ho-Dashian and apart of her girlfriend squad, it’s no secret she pointed her best friend in the direction of new money and marketable stability.

The real kicker is, Larsa released the following statement in the media, then asked for privacy… why do some Ho-related celebrities do that?

Us Weekly — Larsa’s rep issued a statement to Us Weekly. “After careful consideration and 19 years together, Larsa and Scottie have each filed for dissolution of their marriage,” the statement said. “Although they are no longer to be married, Larsa remains hopeful that she and Scottie will always do what is best for their four beautiful children and jointly raise them with love and respect. … She would like to thank everyone for their understanding and kindly ask for privacy from the media during this difficult time of transition for her family.”

Miami Heat superstar guard Dwyane Wade has admitted what everyone already knew: that he fathered a now 5-week old infant son with a groupie.

Wade made the comments prior to last night’s Miami Heat vs Denver Nuggets game, according to ESPN.

After the blogs got wind of the groupie’s pregnancy, Wade and his fiancée, Gabrielle Union, released a statement saying they had taken a break from each other.

“In our time apart, in our break, in our pain and our hurt, a blessing came out of it in my life, having a son who was born healthy,” Wade said. “I got a chance to see him,” Wade said. “I’m involved in my kids’ lives, you know. When my kids lived at home with me, when they weren’t living at home with me, I tried to do everything I could to see them.”

But the groupie disputed the timeline, saying she and Wade had intimate relations while Wade and Union were still together.

Friends of the couple whisper that Union knew about the baby, and she was devastated. “He proposed to her to try and ease the pain of his betrayal,” said the source.

Wade has custody of two sons, Zion and Zaire, from his previous marriage to high school sweetheart Siovaughn Funches.

Asked if the baby compromised his book about fatherhood, Wade said it did not.

“It would compromise it if I wasn’t a father first,” Wade said. “This is something obviously private for my family that we will continue to deal with as a family. But we have a blessing, too, to the bloodline, the Wade bloodline. From that standpoint, to me, it doesn’t state anything differently than what I’ve always shown.”