Her ceremony was on her terms and in her own way.

Solange Knowles married her fiancé video choreographer Alan Ferguson, 51 in New Orleans on Sunday in a southern style eclectic wedding that was out of the norm. The couple arrived for the ceremony on vintage white bicycles, the brides adorned with white roses.

The guest all wore white and a lot of care and precision went into Solange’s big day as her wedding photos will be featured in a layout of Vogue magazine.

Noticeably missing from the wedding festivities was Solange and Beyoncé’s father, Matthew Knowles who’s apparently estranged from his daughter’s due to his highly publicized extra marital indiscretions. Therefore, instead of the shining moment of a father/daughter dance; Solange had a mother/son dance with her ten (10) year old son, Daniel Julez, from her previous marriage. The video is too cute check it out! 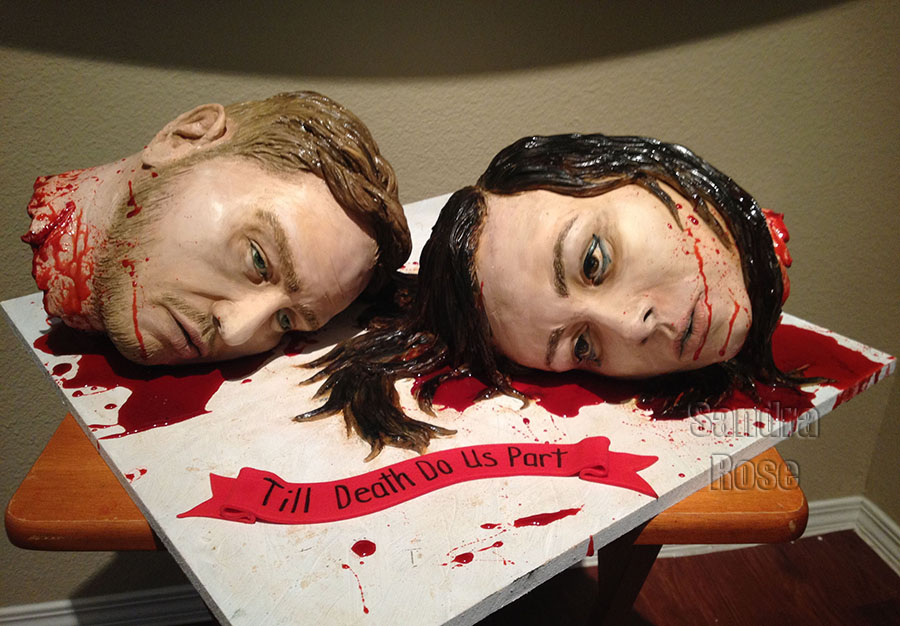 Natalie Siderserf of Sideserf Cake Studio in Austin, Texas, designed the cake for her upcoming marriage to her fiancé, Dave. She said the female severed head depicts her, while the male head depicts Dave.

“We were watching a horror movie, and I was always interested in sculpting lifelike cakes, especially in the face, so I thought, ‘How neat would it be if I did our severed heads?’” Sideserf said. “And Dave was like, ‘That would be amazing.’”

She said the rainbow confetti vanilla-flavored cakes in pools of blood took around 40 hours to make. The lifelike heads were finished with vanilla butter cream frosting and chocolate.

The heads were served on a white board. Their dead eyes seemingly staring at the words ‘Till Death Do Us Part’.

Talk about extreme, this takes the cake!!