Before the death of George Floyd, America had perfected the art of demonizing and justifying the killing of black men. It’s the color of the skin and the place where they reserve the right to police you and your presence.

Ahmad Arbury was jogging while black when he was murdered by two self-proclaimed racist supposedly making a citizen’s arrest. They claimed he was trespassing and looked like a burglar seen in the neighborhood recently.

Black men are viewed as angry, aggressive, violent and dangerous, they are seen as a threat to society here in AmeriaKKa in more ways than one. The black man is haunted and killed with no reasonable resolve except murder.

It’s systematic racism, the stories are all the same, hyped up to demonize the black man, to justify his killing.

So just like the sixties, we now protest and March, while they murder and we repeat….As another black man, Rayshard Brooks was killed by a cop in Atlanta last weekend.

Join the conversation at 6:30 p.m. EST for this week’s topic “Murder, Protest, Murder, then Repeat” on “Conversations Of A Sistah“ 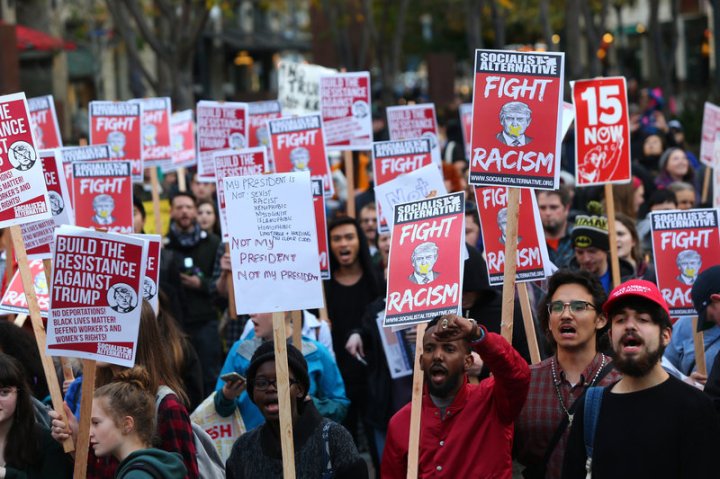 Thousands of protesters took the streets of twenty U.S. cities across the country to express their disdain and denouncing the win for President Elect Donald Trump.

From New York to California, Chicago to Washington, protestors took to the streets and stayed steady in New York outside of Trump Tower marching to Union station. Standing on street signs and climbing utility poles.

Authorities said at least 6,000 people were marching through the streets, setting fires and chanting “Not my president” “Fuck Trump, he’s not my president” and “We Reject the president elect”

From Boston, MA to Seattle, Washington protestors are taking their anger and frustrations of the outcome of this election to the streets.

Trump hasn’t even been sworn into office yet and already thousands of non-supporters are angry and frustrated with the majority who voted Trump into office. So the question is, how was Trump elected? Did voter suppression play a role in this election?

In his post-election victory speech, Trump said that he would be the president for all Americans, and that it was “time to come together as one united people.” This will be a challenge especially since he ran his campaign on a platform of turmoil, hatred, bigotry and sexism.

Life therapist Iyanla Vanzant traveled to Ferguson, MO. to film an episode of her popular OWN Network television series “Iyanla: Fix My Life”.

Iyanla will use her life experiences to help the residents of Ferguson cope after ten (10) nights of civil unrest since an unarmed teenager Michael Brown was gunned down execution-style by a Ferguson police officer.

“My heart hurts for the family of Michael Brown and the citizens of Ferguson,” said Iyanla. “In the wake of this tragic death, it is my responsibility as a mother, grandmother and teacher to show my support and to offer the community a chance to share its story with the nation. In addition, I hope to provide a set of tools to begin the healing process while also promoting peaceful change.”

Iyanla called on famous rappers such as; Jay Z, Naz and Little Wayne to stand with her in Missouri in support of the civil unrest in the city.

Los Angeles – Following the shooting death of Michael Brown and subsequent unrest in Ferguson, Missouri, ordained minister and nationally recognized spiritual life coach Iyanla Vanzant has traveled to the area to listen to the people who have been adversely affected and to join the community in finding a path from violence into healing.

The cornerstone of Iyanla’s work on her television show and through her ministry has focused on resolving conflict and guiding people in crisis to move past their pain.