During the National Anthem or be fined!!!

Former 49er’s quarterback Colin Kaepernick began protesting the flag — which he called a symbolism of oppression of black people in America back in 2016.

After public backlash, Kaepernick got off the bench and kneeled on the sidelines. A few players joined him there, but the protest didn’t become a movement in the NFL until 2017, when President Donald Trump criticized Kaepernick and others for kneeling during the anthem.

According to the NY Daily News, players will have two options: stay in the locker room during the National Anthem or stand “and show respect for the flag and the Anthem.”
Team owners will be fined an unspecified amount if players defy the new policy and bring attention to themselves by kneeling on the sidelines.

NFL players reacted with rage on Friday after President Trump told NFL bosses to fire players who protest and disrespect the American flag during games when addressing the national anthem.

Trumps comments were in response to reports that player protests have resulted in low TV ratings and half empty stadiums.

Trump made the statements during a rally for Alabama Senate candidate Luther Strange in Huntsville on Friday night.

NFL players were livid after hearing Trump’s remarks. Many of them took to social media to vent their anger at the Commander-in-Chief.

The NFL Players’ Union also issued a statement, saying they will never back down from protecting the players’ rights to protest. 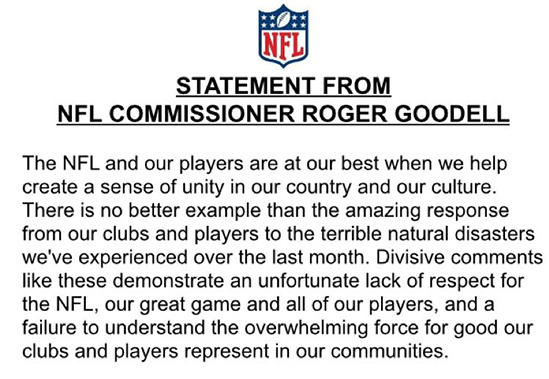 Or her singing for that matter.

Many NCAA fans said Ciara might as well be wearing nothing since nothing was left to their imaginations.

The 32-year-old mother-of-one belted out the national anthem as some fans plugged their ears inside the stadium.

The singer didn’t apologize to fans for her dress or her “singing” on Monday.

“Truly Grateful For This Moment, and To Be A Part Of A Special Night #NationalChampionship,” she tweeted after the game.

But many fans were not grateful for those precious lost minutes they will never get back.

One Twitter user, whose username is NMitchellRyan, said “The real loser of the #NationalChampionship was #Ciara. As soon as she started “singing”, my baby started crying!” 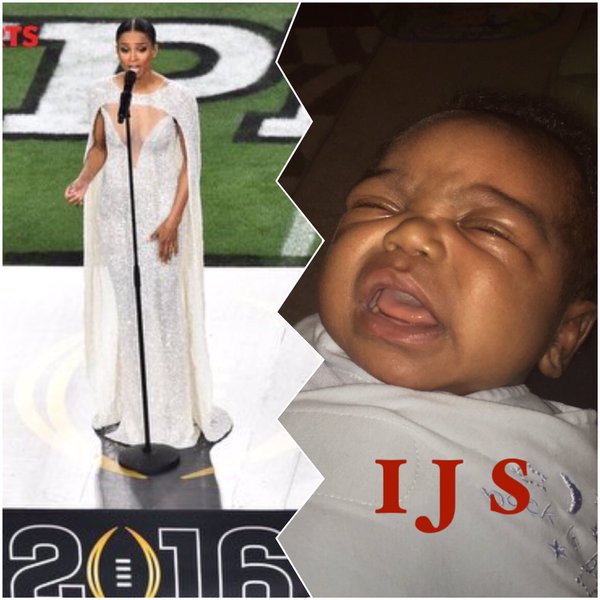 The cat was snatched out of the bag today and Beyoncé’s secret was leaked out, that she lip synced the national anthem at President Obama’s 2nd term inauguration yesterday; either way I wasn’t impressed.

The singer songwriter and producer Beyoncé, doesn’t have the vocals to carry such a powerful song as the National Anthem; which is why I knew she was the WRONG choice to deliver for the event.

Beyoncé is more or less, a burlesque singer/entertainer who can entertain and hold a note but gone are the days of real talents such as Whitney Houston with the exception of Jennifer Hudson of course.

I sat there baffled as the crowd went crazy as if, Beyoncé had delivered a rousing rendition of the popular anthem, when her performance was sub par to say the least.

The band wasn’t playing when Beyoncé performed her rousing rendition of the national anthem at President Obama’s second inauguration.

“We all know Beyoncé can sing,” Master Sgt. of the U.S. Marine Band Kristin DuBois told ABC News today. “We all know the Marine Corps Band can play. We do not know why she decided to go with the pre-recorded music at the last-minute.”

DuBois later added that, to her knowledge, Beyoncé was not singing. It was Beyoncé’s voice, but a pre-recorded version heard by about a million people in Washington and millions more on television.

A representative for Beyoncé did not immediately respond to a request for comment.

DuBois also added, all other performances such as Kelly Clarkson’s rendition of “My country tis of thee” was live. The band was asked not to play for only the national anthem, DuBois added.

Beyoncé knew she couldn’t carry that song and lip synced “IT” to be on the safe side. The “Love on top” singer might be able to hold/carry a note but her vocals can’t carry that national anthem.

More on the Presidential inauguration after the break.