A new untreatable form of gonorrhea, called “super gonorrhea” is infecting people all over the world. This new strain is mainly spread by oral sex, and there is no treatment.

This new strain was developed after doctors misdiagnosed it for strep throat and began overprescribing antibiotics. Researchers say the bacteria has gotten smarter and adapted quickly to resist standard treatment.

The super strain of gonorrhea is resistant to all antibiotics, including the last line of defense — azthromycin (AZT) and ceftriaxone antibiotics.

Patients infected with gonorrhea usually have no symptoms. But if left untreated, gonorrhea can cause abdominal and genital pain and a smelly discharge from the genitals. Also common is fever, frequent urge to urinate, irregular menstruation, or sore throat and difficulty swallowing.

Gonorrhea is the 2nd most commonly spread STD in America. It can increase the risk of HIV infection and can be spread from mother to child during childbirth.

The NY Daily News reports that 3 new antibiotics are in the pipeline, but it is not known when those drugs will reach the market.

The standard cautions still apply: use condoms and gels, or practice abstinence if you are not married. 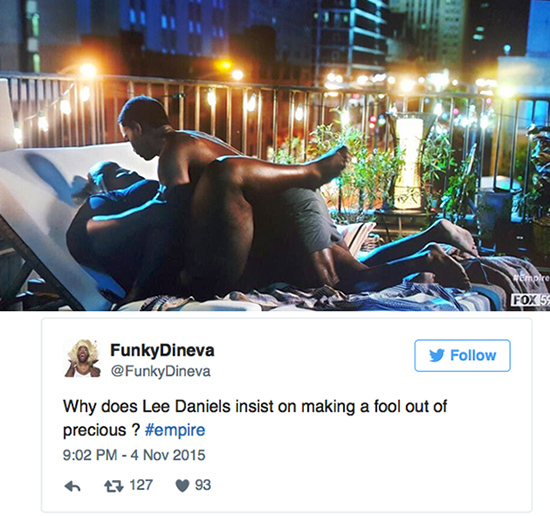 I think this scene on last weeks episode of “Empire” speaks for itself.

Of course it is!!

For some men, it’s hard to even imagine that you could possibly be thinking of someone else while he’s having sex with you…but it happens, more often than you think.

So when this happens why feel guilty about it? Because it’s considered cheating that’s why. When you are making love to your partner, you are suppose to be mentally, emotionally and physically vested; heart, mind, body and soul. The fantasy should only be for the person with whom the loving making occurs, with enhanced passion.

It’s okay for your mind to wander into the fantasy realm from time to time, but what does this say about your relationship? If you’re still pining after your ex and thinking of him/her while you’re having sex, then maybe there’s a problem. And it’s really a sign of trouble if there are some other disconnect happening beforehand, where the thought of you being with your partner physically; is emotionally or mentally agonizing, stressful and an act of pretend.

I hope I was able to answer this question based upon an email received over the weekend.

For some women, they know what they want in a relationship and having children don’t stop that desire of wanting to hop on another man if the current one isn’t satisfactory. But what about the influences these mothers have on their children? Do multiple relationships set the stage for future problems and the possibility of a generational curse? Is it healthy to expose your child or children to different men?

For those women/single moms who find it impossible to keep those legs closed while you raise your kids, tune in tonight at 8:00 P.M. on “Conversations Of A Sistah” via “Conversations Live“ as I discuss “Sex and the Single Mom“.

We welcome 😆 all topic related questions to the show at conversations@optonline.net

He had his dream job, the opportunity of a lifetime, yet the devil in the details “killed it” and it all came crashing down.

Elmo puppeteer Kevin Clash has resigned from “Sesame Street” in the wake of an allegation that he had sex with an underage youth. In its statement Tuesday, Sesame Workshop said “the controversy surrounding Kevin’s personal life has become a distraction that none of us want,” leading Clash to conclude “that he can no longer be effective in his job.”

In a statement of his own, Clash said “personal matters have diverted attention away from the important work Sesame Street is doing and I cannot allow it to go on any longer. I am deeply sorry to be leaving and am looking forward to resolving these personal matters privately.”

As the announcement was made, a lawsuit was being filed in federal court in New York charging Clash with sexual abuse of a second youth. The lawsuit alleges that Cecil Singleton, then 15 and now an adult, was persuaded by Clash to meet for sexual encounters.

The lawsuit seeks damages in excess of $5 million.

Clash, who had been on “Sesame Street” for 28 years, created the high-pitched voice and child-like persona for Elmo, a furry, red Muppet that became one of the most popular characters on the show and one of the company’s most lucrative properties.

Clash’s exit followed a tumultuous week that began on Nov. 12 with a statement from the company that Clash had requested a leave of absence following the charge by a man in his early 20s that he’s had a relationship with Clash when he was 16.

Clash denied the charge from that man, who has not been publicly identified, calling it “false and defamatory.”

Clash, a 52-year-old divorced father of a grown daughter, acknowledged that he is gay and the sex with the first accuser was consensual.