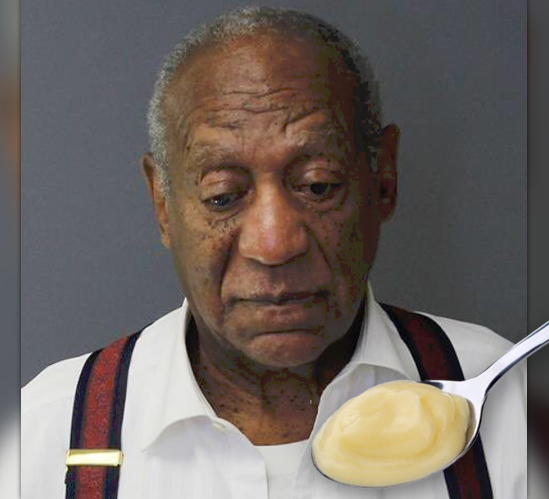 Bill Cosby looked despondent in a mew mugshot photo that was taken at a jail near the Montgomery County courthouse in Philadelphia where he was sentenced to 3-10 years in prison.

The 81-year-old was convicted of three counts of drugging and molesting a former Temple University staffer at his home in 2004.
Cosby will spend the next 3 years at a state medical prison facility. He must serve at least 75% of the minimum 3 year sentence before he is eligible for release.

The comedian was reportedly served vanilla pudding on his first evening behind bars, according to The Blast. Cosby was a spokesman for Jell-O brand pudding for many years.

In addition to pudding, Cosby was fed a meal that consisted of a chicken patty with gravy, mashed potatoes, mixed vegetables and an iced tea juice packet.

His menu will be upgraded when he is moved from jail to a state prison medical facility in Pennsylvania. Cosby is legally blind and he is reportedly in poor health.

60 women came forward to accuse the comedian of drugging and sexually assaulting them over 4 decades.