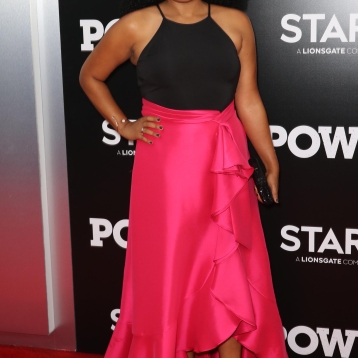 The nail biting drama Power return to Starz this weekend and the show premiered last night at Radio City Music Hall and the cast was out in full swing. The place was packed with Power fans who were in line as early as 12:00 noon yesterday.

And for those of you who don’t know, Power is cable television drama about a NYC nightclub boss failing to escape his past in drug dealing and the season premier was last night at Radio City Music Hall and the cast pulled out all the stops.

In addition, he is a major player in one of the city’s biggest illegal drug networks. He struggles to balance these two lives, and the balance topples when he realizes he wants to leave the drug ring in order to support his legitimate business. He also has to keep his marriage with Tasha, while pursuing his relationship with Angela. There takin to the war with Ghost, Tariq, Tommy and Kanan. Her family sticks together.

Season 5 of Power begins in the States Sunday 1 July, 2018. The final episode of the series is due to air on Sunday 2 September.

20 thoughts on “Power Fans y’all Ready? Cause last night’s Season Premier was off the hook!!!”