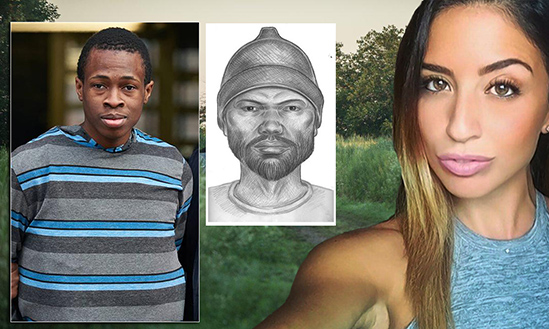 The father of Chanel Lewis, the man suspected of raping and strangling Queens jogger Karina Vetrano, said his son is “a humble kid”.

“It’s extremely surprising… he’s not the person for that,” said Richard Lewis, 70, a retired schoolteacher.

Vetrano, 30, was savagely beaten, raped and strangled while jogging in a Queens park near her father’s home in Howard Beach, NY on Aug. 2. Phillip Vetrano found his daughter’s body among tall weeds in a Queens park later that night.

DNA recovered from Vetrano’s body and cell phone did not match anyone in the crime database.

Police released a sketch of a suspect spotted near the crime scene. But the sketch yielded no new clues and the case went cold.

Investigators focused on 20-year-old Lewis as a suspect after reviewing a 911 call from someone in the area who reported Lewis was acting suspiciously after the murder.

Lewis was arrested around 6 p.m. Saturday outside a home on Essex Street where he lived with his mother, Veta Lewis, his two sisters and the sisters’ small children.

He will be charged with murder and sexual assault, NYPD Chief of Detectives Robert Boyce told reporters.

According to police “This defendant admitted to attacking the victim, admitted to beating her, to strangling her and dragging her body into the weeds,” Queens assistant district attorney Michael Curtis said.

However from looking at the physical makeup of Lewis and his frailness, verses Vatrano’s fit physique, it looks like she could kick this man’s ass. He doesn’t look capable of murder.

Lewis received three summonses — dating back to 2013 — for loitering in the area where Vetrano’s body was found.

Richard Lewis said his son did well academically at a high school in Far Rockaway. He said Chanel aspired to work in social services after he graduated.

I’m sorry but I believe police was so anxious to solve this case, they’re pinning this girl’s murder on Lewis.

98 thoughts on “Can You believe he killed her? Man arrested For Jogger’s Murder”