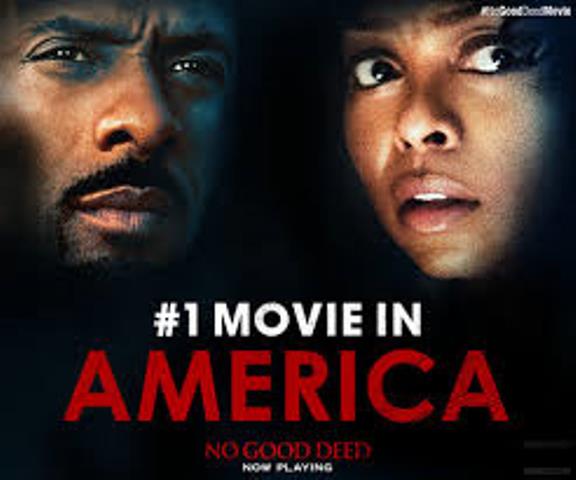 Idris Elba (Colin Evans) who is a convicted killer seeking parole and when he’s denied, he kills the two deputies transporting him back to a Tennessee prison and escapes without one all-out police alert or news bulletin for his capture. I mean NO ONE is looking for this convicted cop killer who shows up in Atlanta a day or so later and succeeds at killing his ex-fiancé.

After crashing a truck he had stolen in a very bad rain storm, Colin stumbles upon a home where Taraji P. Henson (Terry) lives with her husband and two children. Only Terry’s husband, played by Henry Simmons (Jeff), is away on an alleged weekend birthday trip with his father. Terry who is a “work at home” lawyer and established prosecutor, is so caught off guard when this tall, dark, handsome stranger rings her doorbell, that she not only leave him at her open front door several times but after inviting him in; she leaves him sitting alone in her dining room while she wonders off continuing her routine while tending to her children.

So what is so unrealistic about this film? Let’s see:

Terry’s behavior in the movie annoyed the hell out of me, simply because she was not only careless while jeopardizing the safety of her children in her home but she was trusting and distracted based upon Colin’s looks. Colin’s presentation blinded her to the fact that, she never suspected he could be a killer. The fact that she was extremely naïve in this situation as a lawyer and prosecutor with experience in the behaviors of a killer, made it all the more unrealistic.

There were several cries to protest this movie because it supposedly portrayed black men in a negative light. Colin a convict who brutally kills his ex-fiancé who happens to be white. Terry a desperate, attention seeking, deprived, stay at home mom, so distracted to get her groove on that she jeopardizes the safety of her children. I didn’t see the reason for the boycott of this film at all, I found it entertaining and suspenseful with a great storyline, however unrealistically scripted. The producer paired two awesome actors in an intense dramatic thriller as characters who vaguely resemble anything realistic to take their roles seriously.

52 thoughts on “No Good Deed…Extremely unrealistic!”