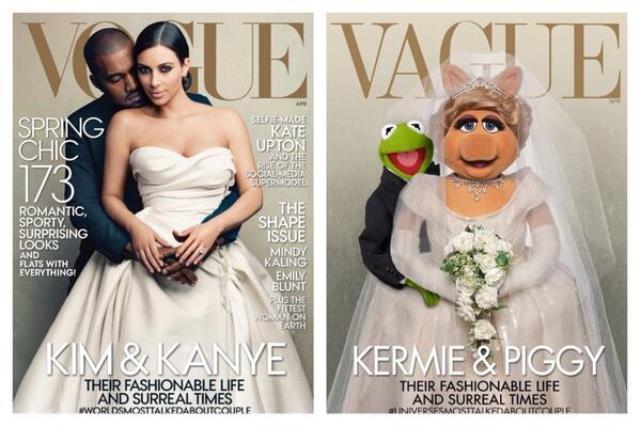 Kim Kartrashian was dying to get her non-relevant ass on the cover of Vogue magazine.

Vogue Editor, Anna Wintour was adamant that the socialite and reality television whore would NEVER grace the cover of Vogue magazine. But Kim’s baby daddy Kanye West and Anna are good friends, so apparently Kanye or wore Ann down until she finally gave in and put both Kim and Kanye on the cover of the April issue of Vogue.

While the soon-to-be-married couple appeared deeply in love, the Internet is not deeply in love with their appearance on the cover of the iconic magazine.

The backlash first caught fire Friday when CBS’ “The Crazy Ones” star Sarah Michelle Gellar tweeted: “Well……I guess I’m canceling my Vogue subscription. Who is with me???”

Apparently many readers were just as displeased as Gellar with the choice, as evidenced across social media. The Vogue official Facebook page racked up 747 comments at the time of this posting — the majority of which are critical of the editor’s decision to feature Kardashian and West on the cover.

Kanye sent Ann a thousand roses on Valentine’s day last month, I guess his ass kissing gesture paid off for him in the end.