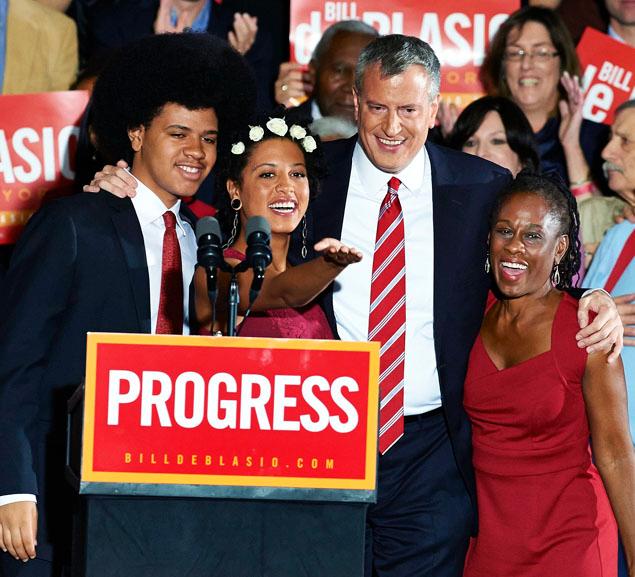 He has the perfect platform, the perfect voice and a beautiful biracial family in these ever-changing tough economic times.

Bill de Blasio was joined by his family onstage to deliver a victory speech at  the Park Slope Armory YMCA after winning the New York City mayoral election last night. de Blasio proclaimed his landslide victory a mandate for his liberal agenda  and a change in course after two decades of Republican rule at City Hall.

People are tired and fed up and they want change as de Blasio held a commanding lead of 74% to 24% — the largest margin of victory  by a non-incumbent in any mayor’s race in city history.

The first lady of New York is an African-American woman.

Washington has Michelle Obama and New York has Chirlane McCray.

Nearly seven out of 10 voters said the city needed to move in a new direction  from Bloomberg’s policies, according to the survey conducted by Edison Research.  And among those wanting change, de Blasio triumphed, capturing 85% of their  votes.

At 52, de Blasio is one of the youngest men elected mayor of New York. And as such, he also represents a generational break from Bloomberg, a 71-year-old  billionaire Democrat-turned-Republican-turned-independent who had charted his own unique course for the city.

Bloomberg’s reign is over, there’s a new mayor in town and his name is Bill!