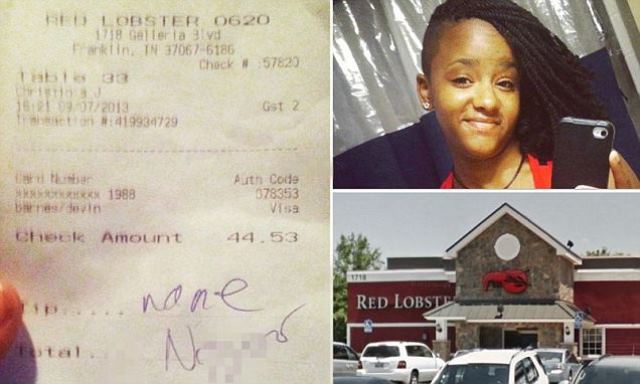 A server working at a Red Lobster restaurant in an affluent suburb of Nashville, Tennessee claims she was subjected to a racist insults after customers allegedly left the words ‘none nigger‘ written in the tip section of the check.

Toni Christina Jenkins, who is 19, was in the middle of her shift at the seafood restaurant in Franklin, Tennessee and serving a couple of customers who racked up a $45 bill during their afternoon meal.

When the time came to pay the check, Miss Jenkins, who is training to be a nurse, says she found the racist insult written on the couple’s receipt.

This is what I got as a tip last night…so happy to live in the proud southern states..God Bless America, land of the free and home of the low-class racists of Tennessee,’ wrote Miss Jenkins on her Facebook page.

‘They were extremely rude, but I introduced myself to them and they didn’t respond. When I came to take their order they simply told me they wanted their food and to put everything in a to-go box. I offered them dessert but they told me abruptly that they just wanted the check.’

‘When I went back to the table they had gone and left the receipt and had written the comments.’

The couple was said to be a man and woman in their twenties.

However, some have also cast doubt on the authenticity of the writing on the receipt, implying that Miss Jenkins made the incident up. Nonetheless, Jenkins, who works two and half days each week at Red Lobster, has continued to stand by her story

Miss Jenkins is the one who was racially taunted and/or insulted, yet the Red Lobster in Franklin where she works has now suspended the teenager on full pay until they decide what to do next.