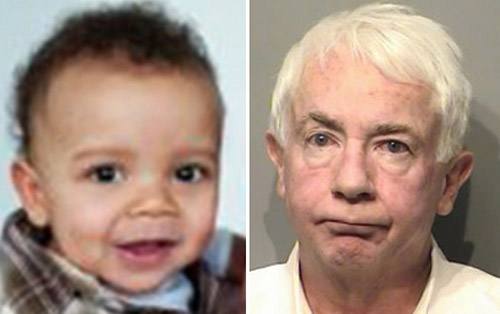 A man accused of slapping a crying 2-year-old baby on an Atlanta-bound Delta flight has been fired from his job, CNN.com reports.

Joe Rickey Hundley of Hayden, Idaho, was sitting across the aisle from Jessica Bennett, 33, of Minnesota, when he became belligerent toward Bennett whose 19-month-old son was crying.

The Delta Airlines flight was just minutes from landing at Hartsfield airport on Feb. 8, when the incident occurred.

Bennett said Hundley reeked of alcohol and was verbally abusive toward her when she was unable to calm her son who was crying from the change in cabin pressure.

Hundley allegedly told Bennett to “Shut that nigger baby up,” according to an FBI affidavit obtained by CNN.

Bennett told ABC News that Hundley was so drunk that he “fell onto my face and his mouth moved over to my ear and he said it directly in my ear.”

Bennett said that’s when Hundley slapped the boy’s face, which made the toddler wail even louder.

Bennett’s son Jonah, who is biracial, suffered a scratch under his right eye. She said Jonah was “traumatized” by the incident.

The incident sparked outrage on both sides of the pond Friday. Bennett, pictured above with her husband and below with Jonah, fielded calls for interviews from all over the world.

Hundley denied slapping the child or making racial slurs, after he was detained when the plane landed. He said he was on his way to Atlanta to be with a family member who was diagnosed with cancer. He said he had only one drink on the plane.

AGC Aerospace & Defense, where Hundley was employed, issued a statement on Sunday:

“Reports of the recent behavior of one of our business unit executives while on personal travel are offensive and disturbing,” said a statement from AGC Aerospace & Defense. “We have taken this matter very seriously and worked diligently to examine it since learning of the matter on Friday afternoon.

“As of Sunday, the executive is no longer employed with the company.”

101 thoughts on “Inebriated Man Who Slapped Biracial Baby On Flight was Fired!!”