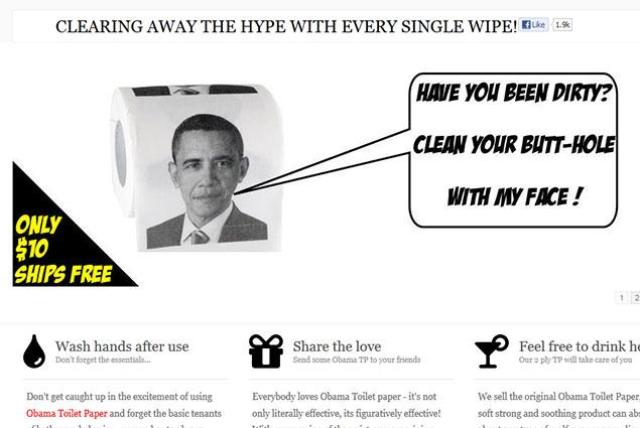 Hello Ceo Readers, I pray everyone is safe and doing well after last week’s storm. Like most of you, our power was down and we had limited access to all of our online sources and internet services; but slowly and surely the recovery efforts are progressing.

With election day just 24 hours away, administrators in a South Florida firehouse found toilet paper with President Barack Obama’s face on it (as pictured above).

Some thought the prank paper at the Pompano Beach Fire Station should just be taken as a joke, but this line of thinking is not only pathetic but disrespectful, petty, low down and hateful. City officials say that offensive or divisive political statements do not belong on city property.

“If you have an opinion, you’re certainly entitled to it. Everyone has their opinion. Put it on your own personal vehicle or your own personal things,” Pompano Beach spokesperson Sandra King told WSVN. “But you don’t display it on city property, on city grounds that maybe someone else doesn’t agree with, that’s politically motivated, and it’s inappropriate.”

The administration launched an investigation immediately after hearing about the toilet paper.

The incident “is being fully investigated as a ‘politically motivated, conduct-unbecoming situation,’ and will continue to be considered accordingly unless the investigation reveals other motivations,” King told the South Florida Sun-Sentinel in an email.

One year ago, a firefighter at the same station was asked to remove an anti-Obama bumper sticker from his locker. He obliged and admitted that he demonstrated poor taste by putting such a divisive political statement on municipal property.

When is enough going to be enough people? When?