A culinary chef on trial for murdering his wife confessed to police how he slowly cooked his wife for four days.

“I just slowly cooked it and I ended up cooking her for four days,” David Viens, of Lomita, California, said in a taped confession.

Viens admitted he “got violent” with his wife, Dawn, after she began “raising hell” during an alcohol and drug binge. Police had been searching for Dawn since her disappearance on October 18, 2009.

Viens, 49, told police he tightly bound his wife’s hands and feet with rope and duct-taped her mouth so she wouldn’t “drive around wasted and whacked out on coke and drinking.”

Viens said he went to bed, leaving his wife bound and gagged all night. “And that was it. I said, ‘Good night.’”

The restauranteurs said he panicked when he awoke the next morning to find his wife deceased. He placed his wife’s body in a large 55-gallon drum filled with boiling water at his restaurant.

“I just slowly cooked it and I ended up cooking her for four days,” revealed Viens in a taped confession which was played for jurors Tuesday. “I manipulated her so the face was down, and I took some – some things – like weights that we use, and I put them on the top of her body. 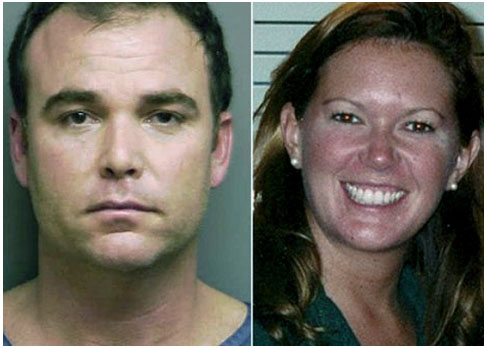 The culinary expert then poured “seven or eight pounds of grease” mixed with his wife’s waste from the drum into his industrial size grease trap, which is later sucked out by a grease disposal company.

He hid her skull in the attic of his mother’s Torrence, CA home. The rest of his wife’s remains were buried behind his restaurant.

Viens gave his confession from his hospital bed after he leaped 80 feet off a cliff in Palos Verdes, CA following a brief police chase. Viens is attending his murder trial in a wheelchair.

Viens probably didn’t serve parts of his wife to diners because human flesh is distinctly distasteful to discourage people from eating each other.