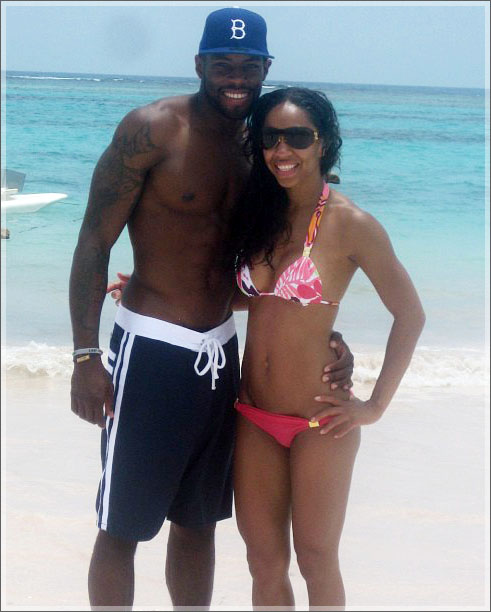 Now I know I’ve blogged about this player before….Antonio Cromartie, 27, (pictured here with his wife), who had ten (10) kids with seven (7) different women in six states; New Jersey, North Carolina, Georgia, Florida, Texas and California, where he used to play for the Chargers.

Cromartie is now married and have 2 children with his wife, she has one kid from a previous relationship and he has custody of his first son, making it 4 children at home.

Well anyway, he’s in the news again because his other baby mama’s, all seven (7) of them (except for his wife), have banded together in a type of camaraderie that is highly unusual.

Cro’s seven baby mamas have pitched a reality Television show, and all they need is his blessing so they can all get paid but he won’t give his consent.

The leader of the pack is the mother of Cromartie’s oldest son Alonzo, Rosemita Pierre, of Tallahassee, Fla. Pierre lost custody of Alonzo to Cromartie, so she may be a bit bitter as well as penniless. “He’s supposedly a role model, but he’s not doing what he should be doing as a father, or as a man,” she told the NY Post.

She says Cromartie continues to defy a court order that allows her to speak with her son three times a week. “They don’t answer the phone,” said Pierre, who’s called the cops in Randolph, New Jersey, to knock on Cromartie’s door. “It’s a hurtful situation” she said.. “it’s like he’s trying to erase me.”

Pierre, who gets no child support from Cromartie, wants desperately to do the reality show because she wants her son to know all his half-siblings.

Even though they all (his kids mamas), split the $500K evenly amongst them, the women from California, Texas, Florida, Georgia, North Carolina and New Jersey want more.

Cromartie, who signed a four-year, $32 million contract with the Jets last fall, received a $500,000 advance up front to pay his delinquent child support to his seven baby mamas.

The NY Post put together a graphic (here) that makes it easier for you to match the children to their mothers. This is a real mess!