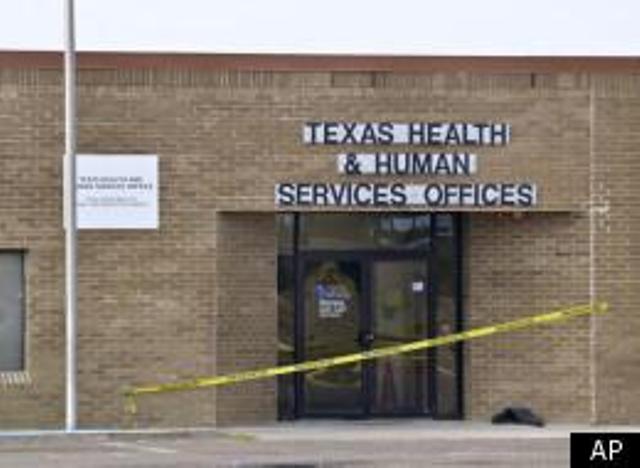 A Texas woman who for months was unable to qualify for food stamps, pulled out a gun in a state welfare office and staged a seven-hour standoff with police that ended with her shooting her two children before killing herself, officials said.

The children, a 10-year-old boy and a 12-year-old girl, remain in critical condition and had just moved to the Texas area with their mother Rachelle Grimmer in July.

Grimmer first applied for food stamps in July but was denied because she didn’t turn in enough information, Texas Department of Health and Human Services spokeswoman Stephanie Goodman said.

Goodman didn’t know what Grimmer specifically failed to provide. In addition to completing an 18-page application, families seeking state benefits also must provide documents proving their information, such as proof of employment and residency.

Goodman said Grimmer’s last contact with the agency appeared to be a phone call in mid-November. When the family entered the Laredo office on Monday shortly before 5 p.m., Goodman said Grimmer asked to speak to a new case worker, and not the one whom she worked with previously.

Shortly thereafter, Goodman said, Grimmer was taken to a private room to discuss her case. She said it was there the mother revealed a gun and the standoff began.

Goodman said it’s not unusual for caseworkers to confront angry or confused benefit-seekers, but that it’s very rare for a situation to escalate to violence.